The Celtic and pedal harps are the most common type of harps taught in conservatories.

In terms of style, you can also take jazz lessons.

Here are a series of questions you can ask yourself before you begin:

At what age can you learn to play the harp?

You can start at any age. The key to progress will be to work regularly and the more you practice, the faster you will learn.

Reasonably, the ideal age to start would be around 7 years old.

We can start initially with games, imitation, and with a well-adapted pedagogy.

From experience, a beginner teenager will go much faster, and an adult even faster.

It will all be a question of time to concentrate, time to work at home, and of course motivation … the gift comes after.

Which harp is the best choice for a beginner?

It is exceptional to be able to begin on a pedal harp.

Usually we start on a Celtic harp first, with gut strings if we prefer the roundness of the sound to the more crystalline nylon strings.

It is advisable not to rush to buy an instrument and is preferable to rent for at least a few months to be sure of your choice.

Ask a teacher for advice first, or visit a specialty store; a good salesperson will be able to advise you.

Avoid buying an instrument at an unbeatable price on the internet at all costs’.

It could turn out to be nothing more than an unfortunate decorative item.

Stores that can advise you:

Where can I find a good teacher?

In the US your can ask American Harp Society.

There is certainly one near you.

And if not, why not consider an in person lesson with a teacher once in a while and video conferencing lessons the rest of the time?

Some may provide that option.

What if I want to try it on my own first?

You are in the right place.

On this site you can follow the introductory course modules and learn with a good foundation.

In addition to these lessons, free videos will allow you to learn by imitating French traditional songs.

Can we play music right away when we start the harp?

Yes right now ! Very easy songs, of course. Your teacher has tons for you!

What style can we approach at the beginning?

I would say all styles, as long as the writing is appropriate for the level, i.e. simplified at the start.

It could be a folk tune, a dance, an extract from a classical tune, a meditative piece, or even cheerful and playful … unless it is mysterious, contemporary in style or downright rhythmic!

Are we playing alone or with others?

Generally a course is individualized to correct the technique to follow the progress of each student, but depending upon the professors and the teaching structures, there may be the possibility of part of the course as a whole, and even if it was not the case, it is always good to listen to others.

Can we play quickly with other musicians?

Yes, it all depends on the music you choose, but you can do it right from the start.

What is the harp repertoire?

Vast subject… there is no trace of the music at its origins.

Some harpists have adapted melodies ranging from the Middle Ages to the Renaissance.

The Baroque era with its double and triple harps left us little written music, because the instrument had more of an accompaniment, a role with basso continuo.

However, there are many arrangements for the harp.

The true harp repertoire began in Ireland with O ’Carolan in the 17th and 18th centuries.

He actually wrote a great many pieces for the Irish harp, but most of the time only the melody was written.

It was in France, around the middle of the 18th century, at the time of Naderman, Bochsa, Boieldieu, that the repertoire was enriched, reaching its true development from the creation of the double-action pedal harp in 1810 by Sébastien Erard. The harp experienced its “rebirth” in the Romantic era.

Composers like John Thomas and Parish-Alvars, a great Welsh harpist and composer, raised the harp to the rank of virtuoso instrument.

The harp definitely took its place in the orchestra, opera and ballet after 1830, notably with Berlioz and his famous Symphonie Fantastique with six harps in the orchestra!

The delicate repertoire of the harp evolved at the same time as the Impressionistic movement of painters, thanks in particular to its subtle bisbigliandi and glissandi effects, and other colors that Debussy and Ravel revealed in their concert pieces, respectively “Sacred Dance and Profane Dance ” and “Introduction and Allegro”.

Marcel Tournier, Marcel Grandjany, Alphonse Hasselmans, Carlos Salzedo, were not only brilliant harpists but also wonderful composers who highlighted the instrument and performer.

I am only citing here the most outstanding of our French harp school, cradle of the pedal harp. But I invite you to search for works with harp on the internet.

The instrument has crossed into the 20th century, made a foray into jazz and continues to evolve through the creativity of rising generations.

If I have questions, doubts, need information?

Please do not hesitate to contact me, I will be happy to reply.

To return to the most common models, here is a brief description:

The plane of the strings is diatonic: C, D, E, F, G, A, B, C.
C’s are red and F’s are blue (sometimes black). They serve as benchmarks for the other strings.
With all levers lowered, the harp is tuned in Eb. So to play in C major (the scale you all know), you have to lift the levers: B, E and A. 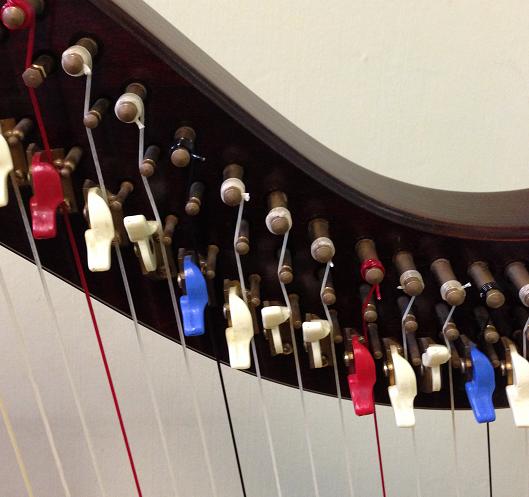 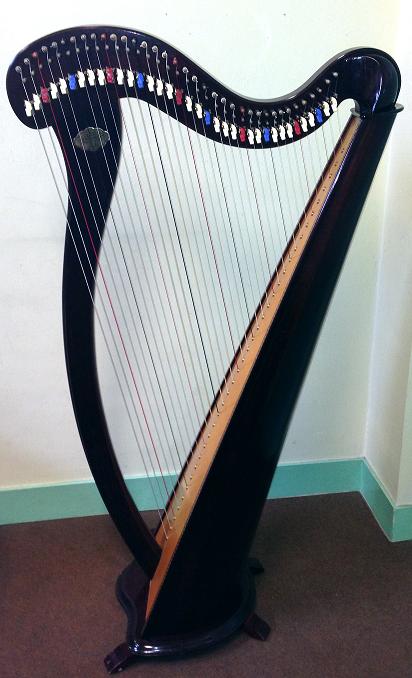 The levers are used to make semitones, that is, to raise or lower each string by a semitone or half-step.

Two lever positions per string are possible.
We can therefore have:

The Celtic harp can have a varying number of strings depending on the size. We can find models ranging from 22 to 38 strings. The standard model has 34 strings.
Each string has a number and a gauge that you count from the highest to the lowest.

The strings of the Celtic harp (for a 34-string harp):

According to the models:

Depending on the model, it has about forty strings, as well as 7 pedals which allow the same alterations as the Celtic harp. This instrument predates the double-action harp (classical pedal harp). It is considered today as an intermediary between the Celtic harp and the large harp. Its interest is more economic than musical. The hands are freed from the constraints of the levers, but its harmonic restriction is limited to tones ranging from 3 flats to 4 sharps.
It is strung in metal for the bass, in standard gut for the middle and treble, and in nylon for the highest ones. 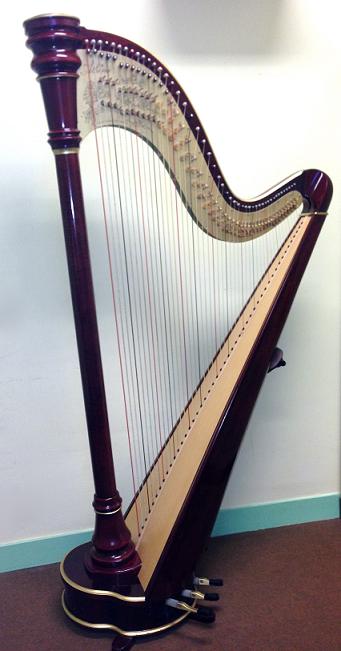 The strings of the pedal harp:

The row of the strings is identical to that of the Celtic or single-action harp.
It has 47 strings, although there are a few 40, 44, and 46 string student models.

Notes are altered using 7 pedals, one pedal for each note.
Each pedal has three positions: down (sharp), in the middle (natural), up (flat). It can be fixed in each position by half steps. 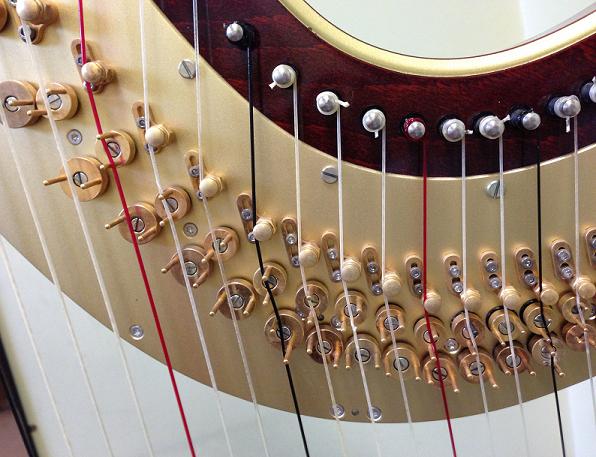