The history of the harp

The Evolution of the Harp Over Time

The harp is one of the oldest stringed instruments. From its origins, the harp was a sacred instrument that allowed priests and priestesses to communicate with the gods.

In tombs in Mesopotamia there is evidence of harps in the 5th century BC.

It then had between 5 and 7 strings. The number of harps that were discovered in Mesopotamia was minuscule compared to the numerous harps represented in Egypt.

The harp was represented on paintings adorning Theban tombs, stelae, statues of musicians and objects of everyday life. 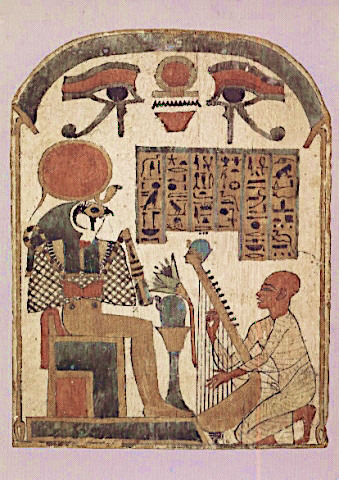 During three Egyptian dynasties the harp evolved in its shape and number of strings. It first appeared arched without a column.

During the Saïte period (-664 to -525 BC) the Egyptians imported from Assyria (North of Iraq – North-East of Syria) angular harps, made up of two parts: sounding board and neck. 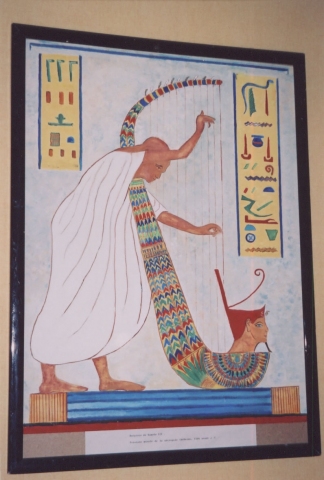 Then this angular harp spread in the Near East, Persia, Asia Minor and among the Hebrews.

The Syro-Phoenicians added a column to consolidate it.

Then the harp spread through Greece, to Rome, then to India (2nd century BC) with an arched harp, and in the 17th century with an angular harp, both disappeared, except in Burma there remains a 13-string arched harp, still played today.

It died out in the Ming Dynasty, only to reappear in the 20th century in a form similar to our Western harp, but still very exotic. 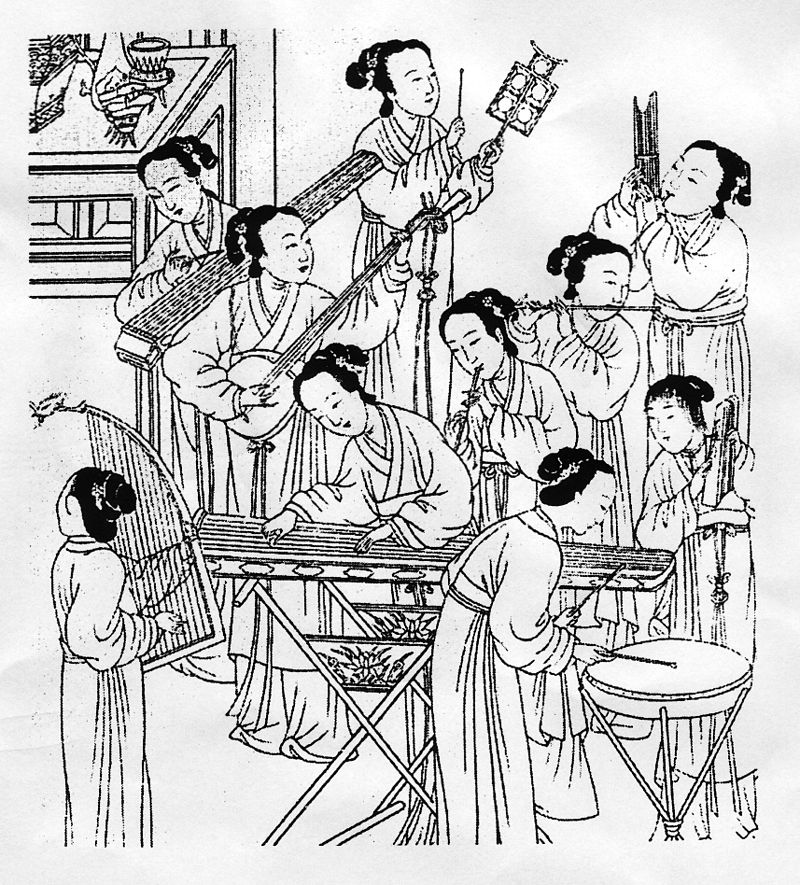 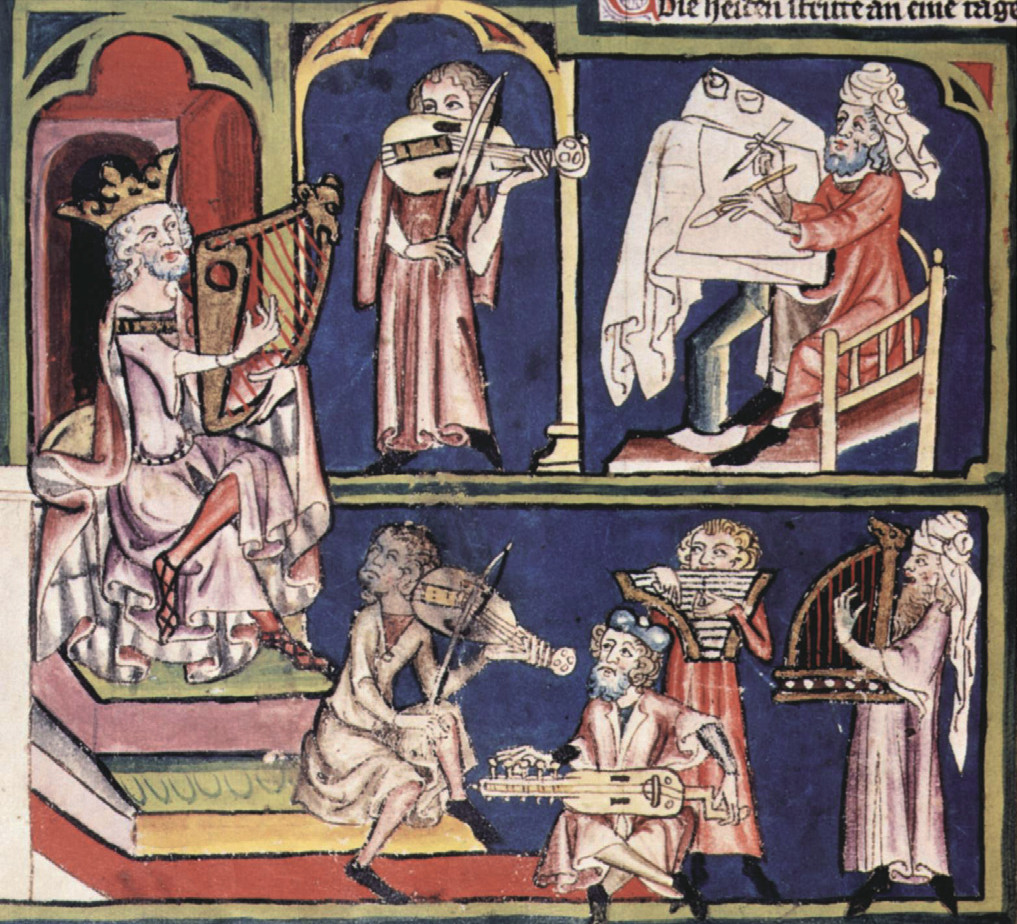 The harp occupied an important place in Oriental Antiquity. Its appearance in the Occident came around the time of Christ.

The Egyptians traded tin with Ireland, and it was through this flow of trade that the harp came to Ireland.

It then reached Europe. The harp was already mentioned in ancient Scandinavian poetry, in Russia, and in Ireland.

Among the Hebrews, King David played the harp. He is represented there in this painting from the Middle Ages.

In the Middle Ages, the harp was diatonic and had 12 strings.

There were two types of harps:
The Roman harp was popular until the 12th century and used to accompany a vocal melody, and could also play relatively simple solos. 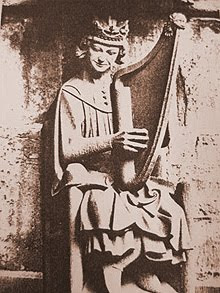 The Gothic harp was played from the 12th to the 16th century. This harp had between 21 and 28 strings, which were gut.

There were harpions at the base of the strings to give a buzzing effect which was esthetically pleasing at that time. This harp will be dethroned by the lute.

During the Renaissance, the medieval diatonic harp possessed a unique tonality, but remained incapable of modulation.

Then the harp benefited from a major renovation: it received a supplemental range of strings to become completely chromatic.

It was mostly used for basso continuo. (accompaniment instrument).

Its range is wide and can go as low as the double bass.

In 1607 in Mantova, Italy, the Arpa Doppia had its debut in the opera Orfeo by Monteverdi.

The Renaissance harp (or Arpa Doppia) consisted of a  diatonic range of strings (white keys of the piano) and a range of altered notes (like the (black keys on the piano). 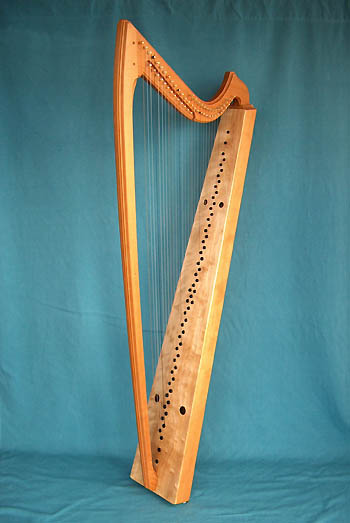 Report on the Welsh triple harp

In the 16th century the Gaelic Harp was constructed with three ranks of strings.

It was equally used in continuo and notably in the concertos of Vivaldi. 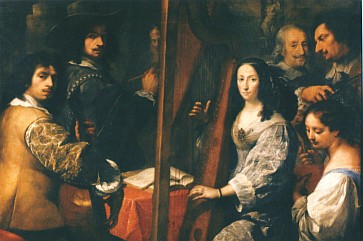 Around 1660, Tyrolien (German) instrument makers, invisioned that the tension of certain strings could be changed by moving a lever by hand.

This system modified the sound of each individual string. That’s the basis of Celtic harps as we know today. 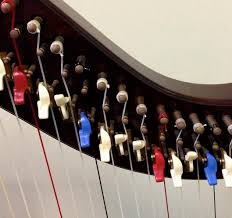 The lever harp became the Celtic harp. Here on a modern harp the levers are in plastic, and are moved manually.

The lever shortens the string and it sounds a half-step higher. 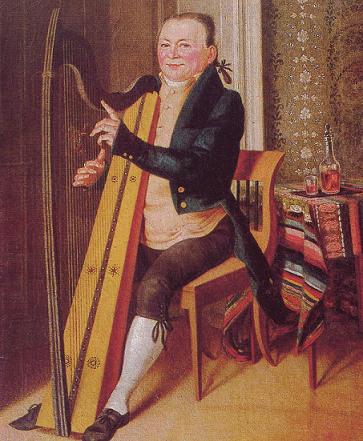 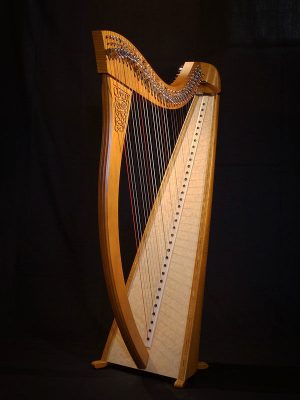 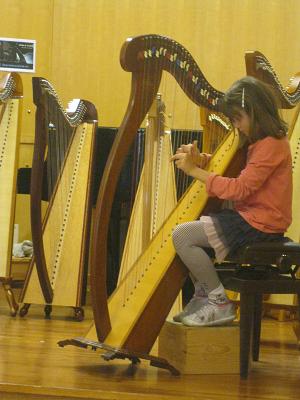 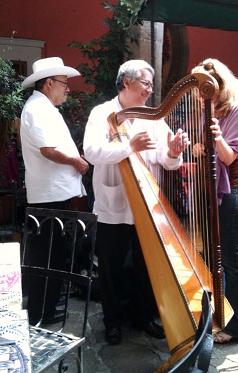 In Latin America, the harp was imported by the Spaniards.

This is the Llanera harp.

In Europe, the instrument continued to evolve. Shortening the string with a lever at the top of the string allowed the note to be raised by a semitone. Harp makers then discovered a way to play in all keys by connecting pedals to these levers and free the hands.

1697: THE HARP WITH LEVERS AND PEDALS

In 1697, a German harp maker named HOCHBRÜCKHER discovered a way to move the levers, moving the strings laterally with a set of seven pedals placed at the base of the instrument and connected to the levers by ingenious mechanicism inside the column.

Each pedal could be lowered a notch. This invention will be perfected in 1720. The harp was tuned either in B flat or in E flat and had about 35 strings.

This is the single action harp.

How does it work?

One pedal will activate all the notes of the same name (for example all the D’s).

The pedal is connected to the mechanism by a rod which passes through the column, then a chain system will simultaneously activate all the notes of the same name in all the octaves. 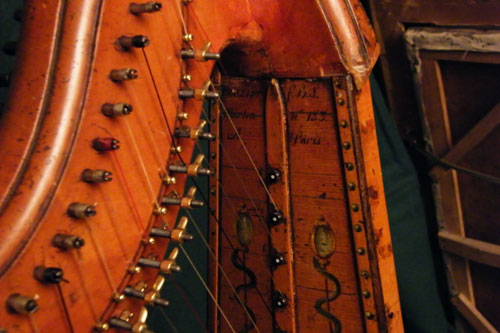 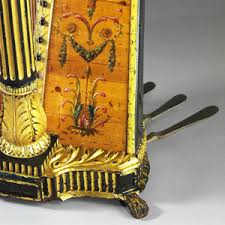 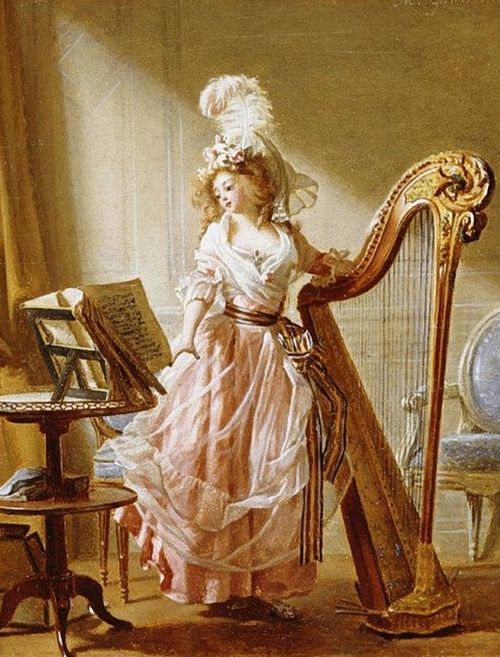 She arrived in France and introduced the pedal harp in 1770 by giving her first concert at the court.

The harp became à la mode in Paris, and numerous women from good families followed her.

Around 1780 a French instrument maker, Cousineau, replaced the levers with béquilles which pinched the string without shifting it from the main plane. 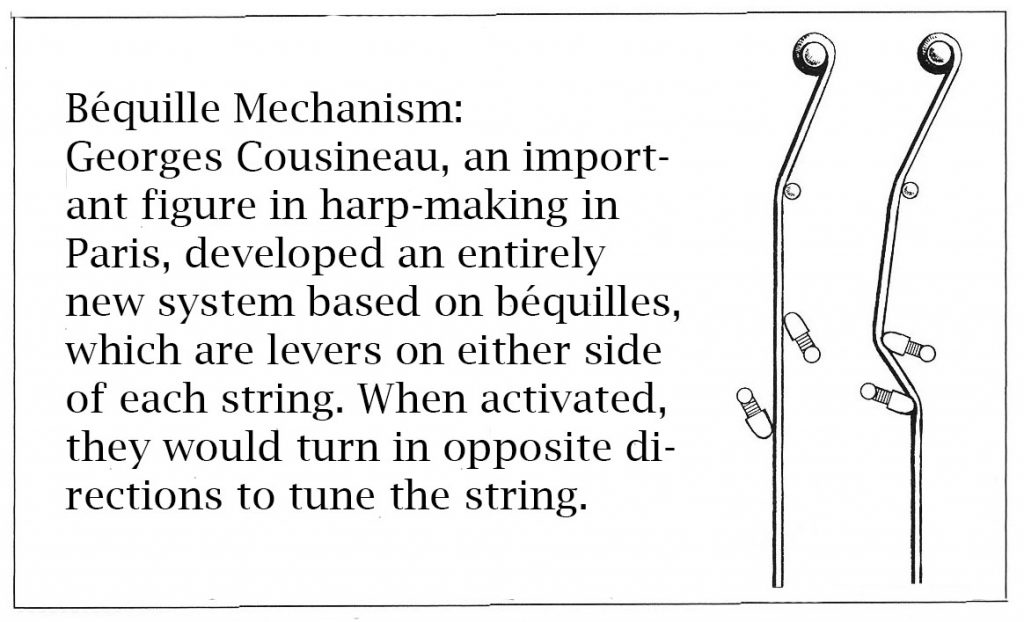 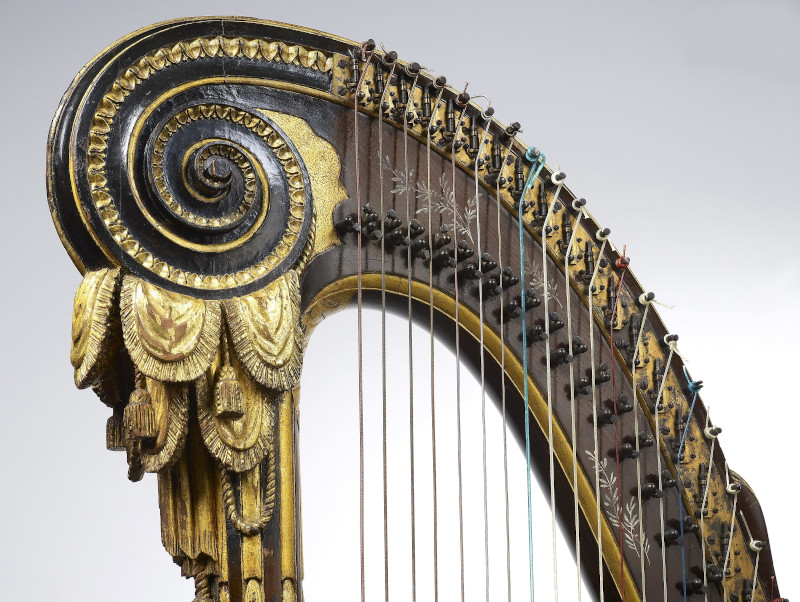 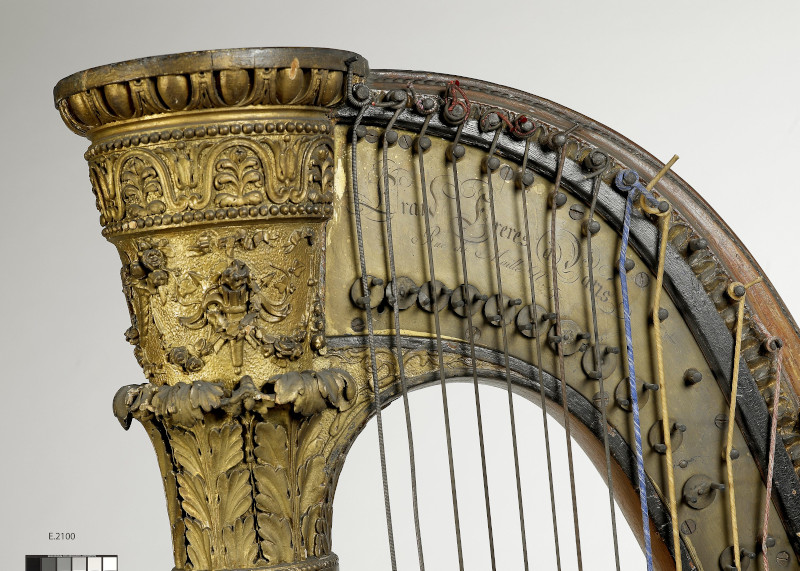 Then the béquilles were replaced by discs with a fork, which when turned, pinched the string with less tension. That prevented string breakage.

In 1796 Sébastien Erard invented this system with discs and forks.

J.H. Nadermann equipped the single action pedal harp with an eighth pedal, which opened or closed a door at the back of the sounding board, to change the volume and color of the sound.

This was abandoned at the beginning of the 20th century. 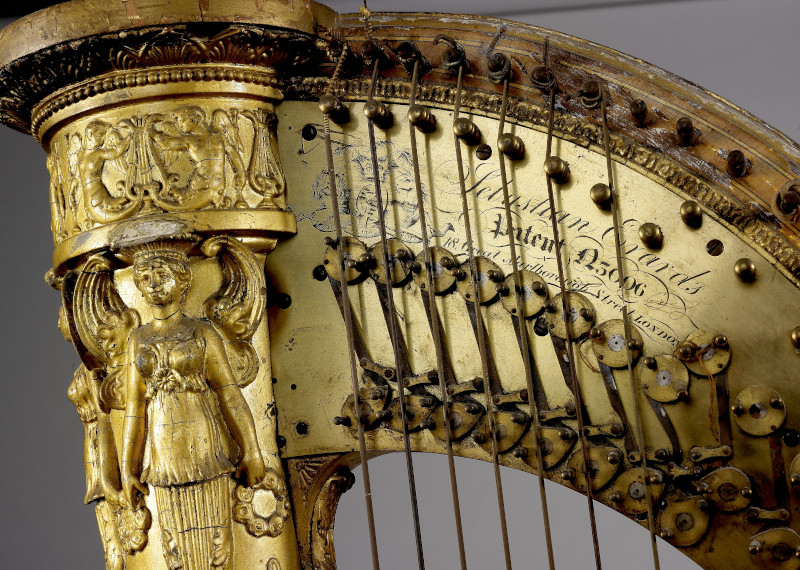 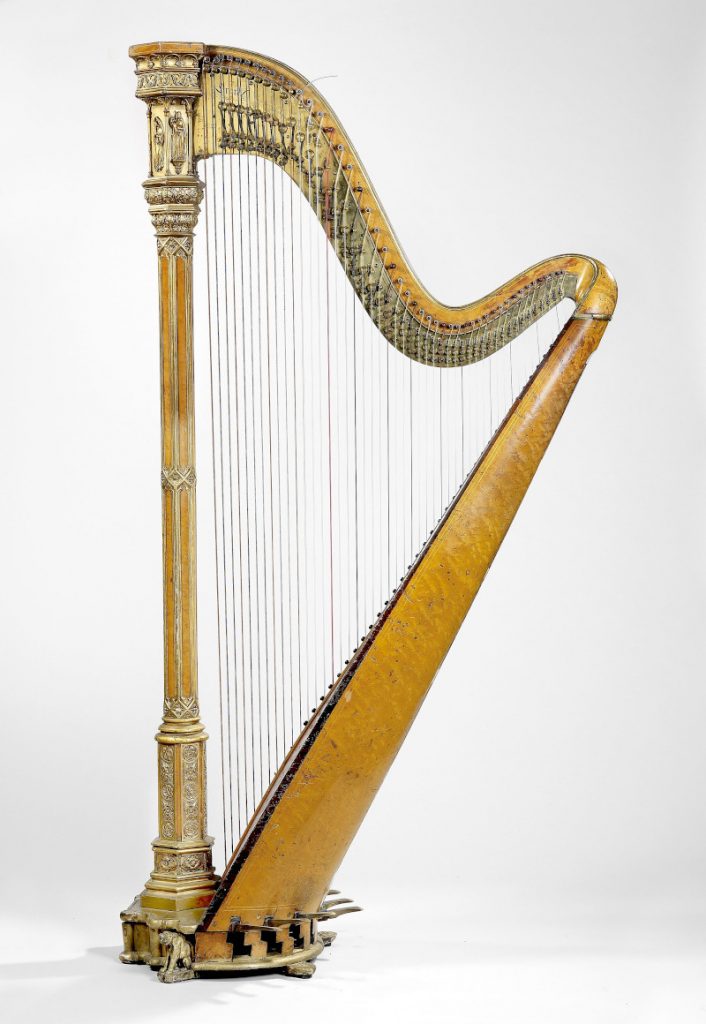 It was in 1811 in London that Sébastien Erard (emigrated to flee the Revolution) presented his new model of the double action pedal harp.

Shortly before, Sébastien Erard thought that each pedal at the base of the harp could have two notches, which would allow each string to have three possible pitches:
– the flat note,
– the natural note
– the sharp note.

For this reason it is called  the double action harp and has a maximum of 47 strings. The treble and middle registers are strung in sheep’s gut and the bass were coiled metal strings.

1894: THE CHROMATIC HARP (without pedals) was invented by Gustave Lyon from the Pleyel firm.

This crossed string harp has 78 strings fixed parallel in two rows on the table, the diatonic strings were placed on the left side and the accidentals on the right side. (Or more simply a row for the white keys of the piano and a row for the black keys).

So there was no more need for mechanics.

This harp was used at the Paris Conservatory until 1933.

Due to the inconvenience of playing of the chromatic harp, the double action harp was preferred by harpists. The pedal harp creates one of the prettiest effects of the harp, the glissando. 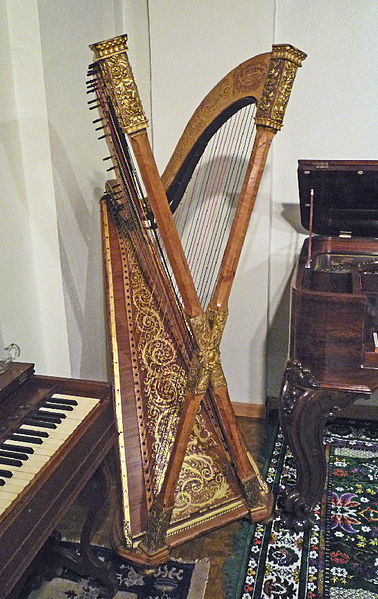 (There are only two left in the world).

The innovation of modern harps:

This revolutionary harp is part of the collections of the Musée de la Cité de la Musique in Paris.

It is an electromechanical system of movement of the pedals of the harp set to a programmed pattern and automatically executed by a machine.

The final model is an electro-pneumatic system powered by a compressor.

To cope with the evolution of the harp in Jazz and contemporary music, in 1984, Joël Garnier, from the Camac house, launched the Electroharp, while Salvi released its first amplified harp.

To avoid feedback effects, the harp without a hollow body or sounding board, the “Solid-body” was marketed by Camac around 1990.

The Electroacoustic harp (pedal harp with one pickup per string) can be played in an acoustic or electric version.

The Celtic harp has also benefited from this development, thus contributing to the development of a new repertoire.